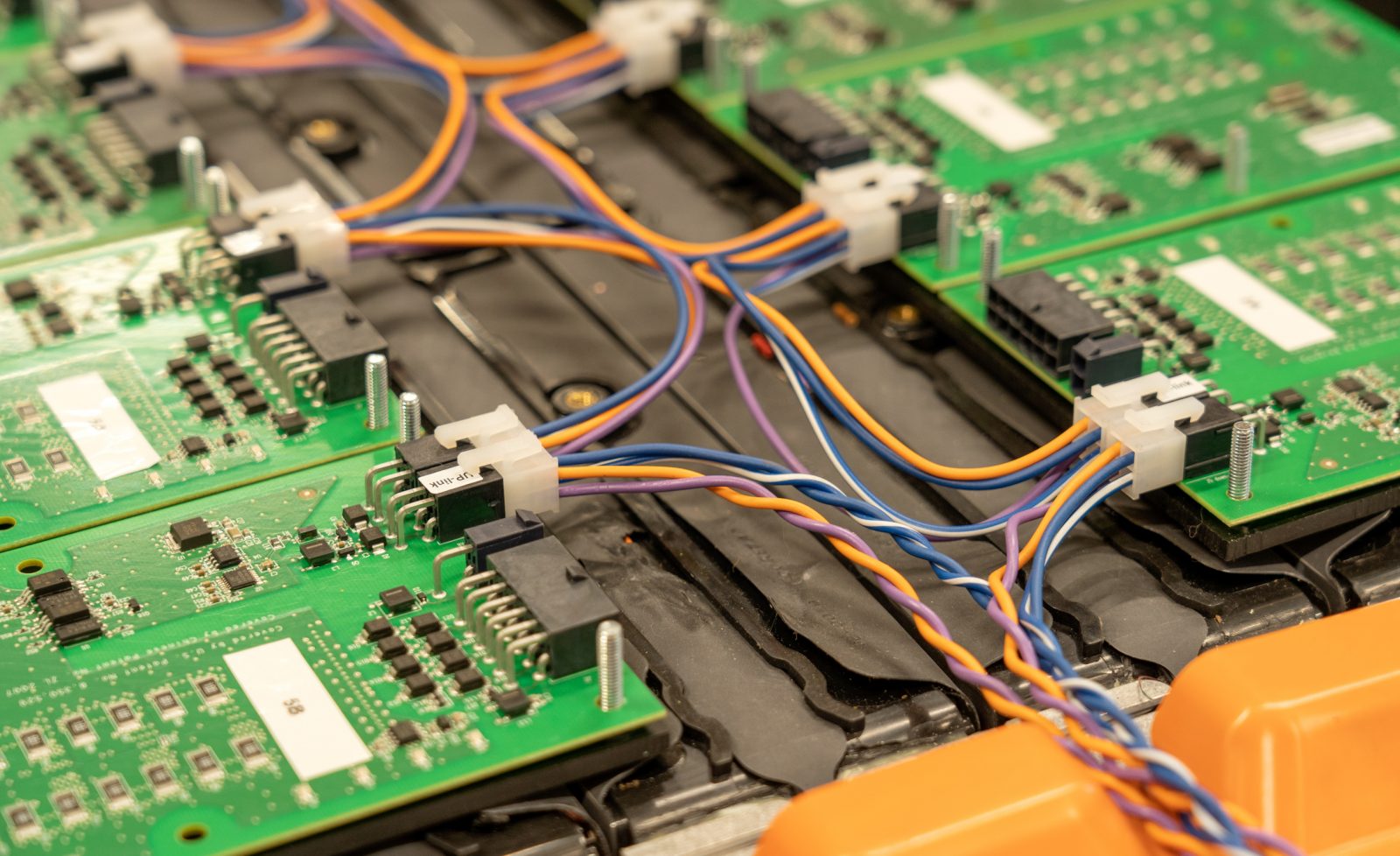 Ruben dreams a lot about electrical solutions for all types of classic Citroëns. And he realizes these dreams too. Electric 2CV’s, a smooth gliding DS, a HY that enters all environmental zones… a vision for an electric C6 to make it future-proof. A lot is happening in his laboratory.

“As a child I already had one big passion, the car, and in particular my father’s car, usually a 2CV. I also had a problem of conscience. Cars are not very good for the planet. Cycling along the highway on car-free Sunday in 1973, my biggest fear was that the cars would have been abolished when I would finally be old enough for driving lessons. It was clear to me that the car as it was, with its unbridled thirst for fossil fuels, would not live forever. Almost half a century later, I realise it didn’t go as quickly as I thought back then. The petrol car is still there, and I have already been able to drive around a million miles in it.

After many wanderings, through music, the world of modern dance, theater, graphic design, and some other crafts and accidents, I returned to my old passion, but with a twist. In this way my troubled conscience can be soothed a little.

In 2011, I decided to build an electric 2CV, because I thought it was necessary, because I could do it, but mainly because I wanted one. I started the company 2CV Électrique, and after quite a bit of pioneering work I got it done, a wonderfully running tin snail, completely silent and ready for my goals. I drove through Amsterdam and surroundings, also a little further away and even to Ireland and Norway.

An electric AK350 (for a customer in Amsterdam), an HY (for an entrepreneur in Belgium), a DS (for personal enjoyment and research) and various design and supervision work on external projects followed. Each time one technological step higher, with even better components and always a better driving car than the original.

I met Sander in 2013, he entered the E-2cv initially with skepticism, went for a ride, and was convinced. Such silence, smoothness and power. We had a good conversation and a collaboration was the result. First I came to work as a mechanic in the garage to build up ducks. Meanwhile, plans were made, the latest state of technology was kept up and endless conversations were held with interested parties. The price remained a threshold. The right moment was not yet there.

Yet we remained confident, there had to be room to give shape the collaboration. That space was found in a new building, where the two companies were merged. The collaboration was concluded with the silver 2cvE that we built. A beautiful car that shows the possibilities and can be tested on the road.

But I’m not done just yet. I keep developing. I design more and more parts digitally and have them laser cut and folded. This way we can tailor our battery boxes, adapter plates and engine mounts for every project, and produce them professionally. I also manage all the diagrams and cable harnesses in-house.

There is also strong development in the area of charging. We have the first 2CV that can fast-charge, by opting for a high voltage system. This is the standard in modern EVs, but not yet very common in retrofit – making an existing car electric. We’re also working on ideas to make it possible to connect your classic EV to your solar panels as a buffer battery and thus become more energetically independent.

We have developed the EV chassis, a special strong 2CV chassis full of batteries. You can read more about it here.” 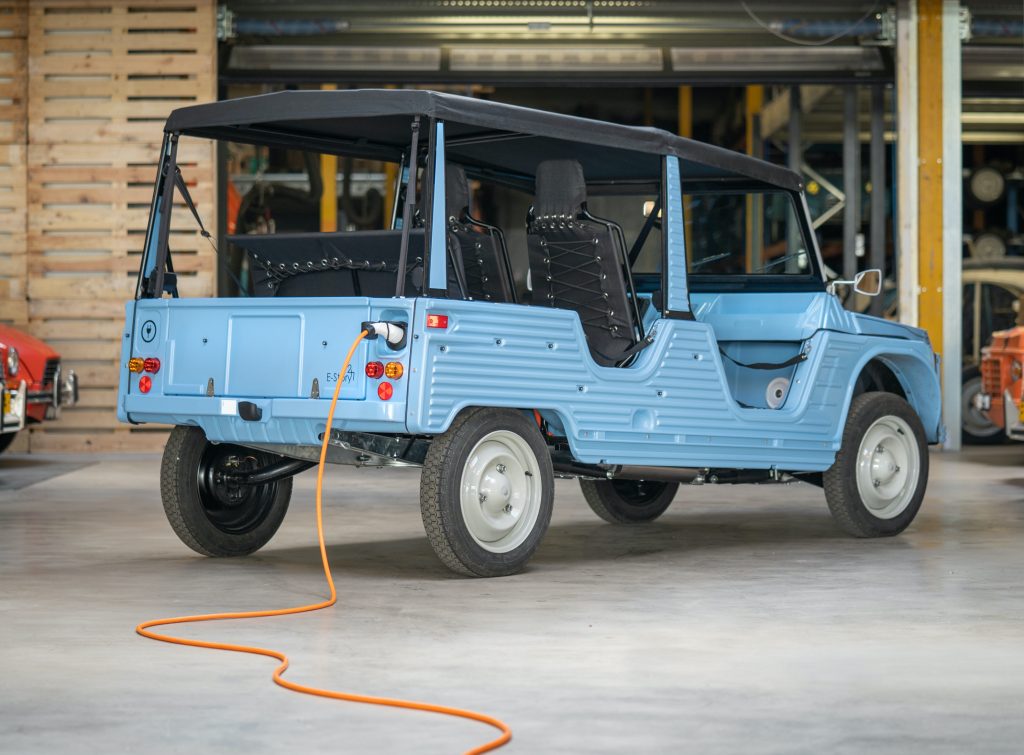 City car, beach mobile, cool company car, shopping car at your holiday home, this Mehari can be it all. 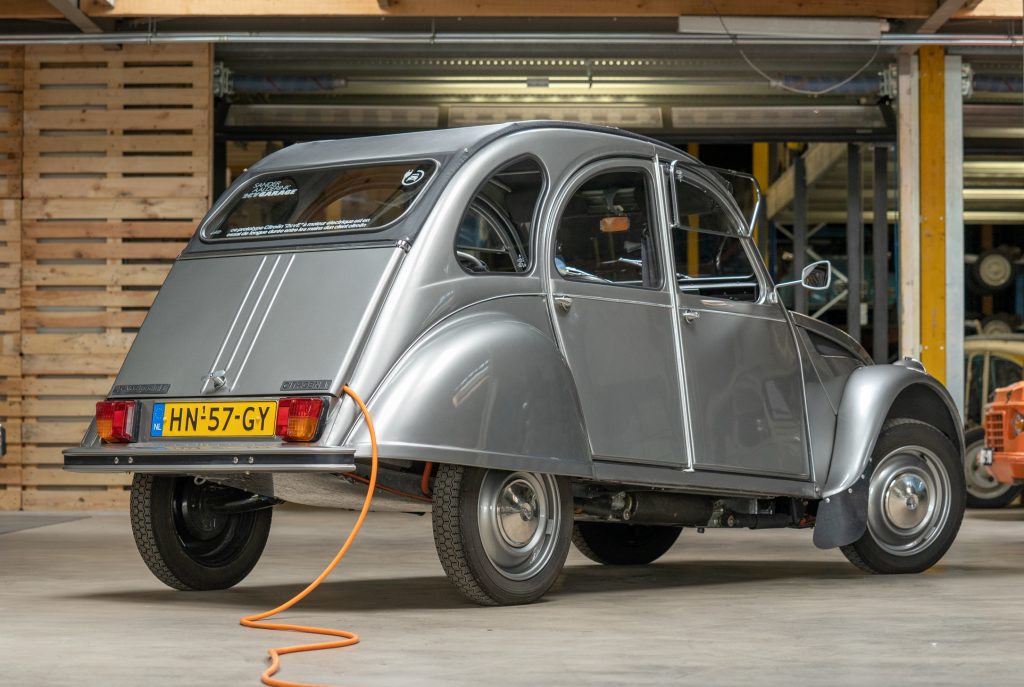 We can change your own or a rebuilt 2cv into a smooth ride. With recycled or new materials, modest or extreme range, ready for home or quick charging. It’s all possible.