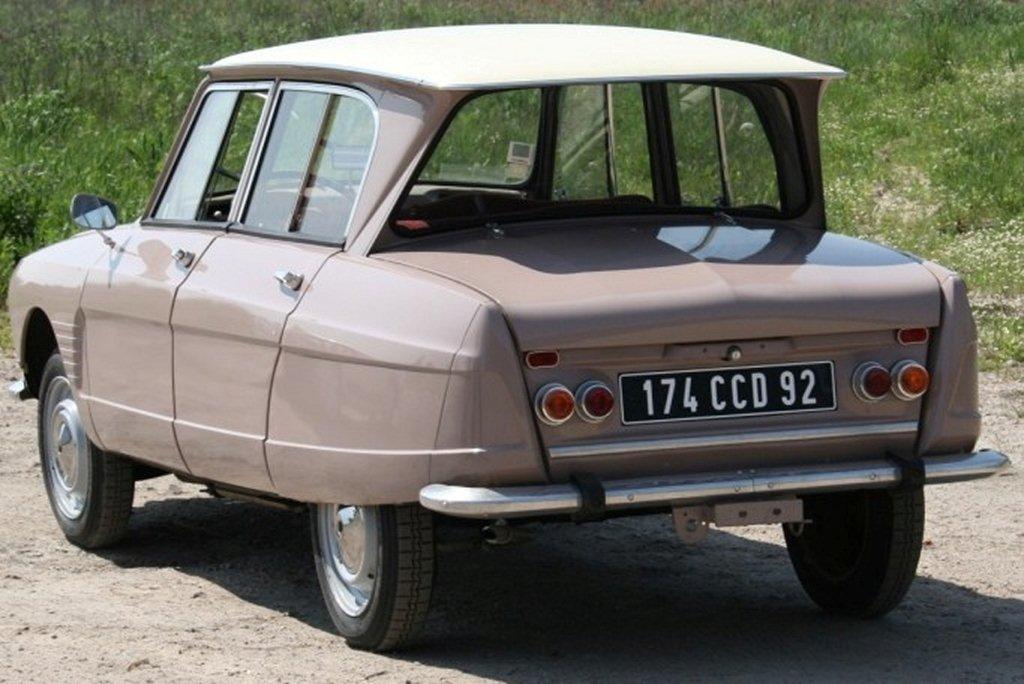 To keep you and ourselves entertained in this period, we browse through our (digital) photo albums.

Sometimes we buy cars that don’t even make it to the website. In 2011 it happened with this beautiful ’63 Ami 6 Berline. It had the beautiful colour Vieux Rose; yes, it is really original. The original red holly leaves interior matched it perfectly.

We found it near Paris, got it in and sold it right away to a loyal customer who came by that day. A few years later he traded it in on a beautiful 2cv. Unfortunately again without getting the site, it now went to a Japanese customer looking for exactly such a rare thing.

So if you don’t want to miss out on something special you’re looking for; please let us know. We often find something matching your wishes within our network. Something that again will not make it to the website …

After the Porsche 911 got a large spoiler, now the 2cv got one as well. Citroën Köln, the German importer, developed together with the company Hoffmann a package of spoilers, mudguards and sill extensions. A sticker set completed this version. You could order the parts separately from the accessory guide or have your 2cv delivered ready-to-use.

This car was also delivered this way and has only driven 39,000 km. After a few years of driving, it was taken back by the supplying dealer, who put it in his own collection. We were able to buy it there in 2011. And we were able to find a new owner for it!.

To enjoy you and ourselves, we go through our (digital) photo albums and share what we met and had in our garage over the last 20 years.

13 April | One of our loyal customers asked us in 2010 to find him an original, unrestored 2cv A. You won’t find it on every street corner, when these 9 horsepower 2cv’s were made, the production numbers were not that high and the early 1950s are quite a long time ago…

We found this ‘53 A. The roof and interior were once replaced, and of course some wear parts such as battery, brakes and tyres. But apart from that it was really completely original, never welded let alone rusty or restored. And almost entirely in its first paint.

It started its career just south of Paris, went to an owner in Paris in ’61 and to a collector in Auxerre in the ’90s. We found it there. Our customer cherished it, but recently traded it in on a beautiful other 2cv. And we found a new owner, a collector in the Netherlands.

The car has many nice details; the thicker fuel filler pipe and cap, the different front wings with angular inner wings, a differently pressed and welded bonnet, the maximum load capacity printed in the trunk, the rubber caps in the adjustment holes in the floors for the front seat, the wheels with a hollow rim and much more.

Originally supplied with hardly any lighting and certainly no turn signals. These became mandatory later on for all cars, after which all kinds of sets became available. This got a nice switch incorporated in an extension of the dashboard, the cable was attached to the parcel shelf with clamps. A nice detail is that the clignotants on the side are at different heights; apparently not a mechanic with a carpenter’s eye…

11 April | My brother walked around at Citromobile in 2005 and then came running back inside; “An amazing yellow 2cv has just come in on a trailer, I think it is for sale.” We went for it, it turned out that it was for sale and had just been picked up in France. Jaune Mimosa, orange cloth interior, completely original and only 21,000 km. An automobile dream! We bought it immediately, it was an opportunity not to be missed.

We gave it an NL identity and prepared it technically. The first customer who responded wanted a beautiful 2cv to take the dog to the beach; I saw the beautiful orange upholstery already ripped to pieces. He didn’t like me refusing to sell the car to him, but this was one really difficult to let go.

Shortly afterwards it was sold to acquaintances of my brother. They enjoyed it for years, in NL and France. And it remained very beautiful.

In the years that followed, I was regularly approached by someone who would have liked to buy the car and regretted not doing so. It was exactly the 2cv he had seen in the brochure as a little boy, it often was under his pillow. If the car ever became available again… Well, it did recently, with only 27,000 km on the clock, and we made a deal yesterday. With a few years delay, a dream has come true.

7 april | We found this Primagaz HY and AZU in 2011, both in the same week. Unfortunately, no history was known from the HY, but it had a beautiful patina. We found the AZU through good colleague Casper Pasman. It was once in use in Marseille and still in beautiful condition. Both are now part of the collection of Eendenmuseum Andijk.

6 april | Even more extreme than yesterday’s AK is this Acadiane we once encountered in Belgium. Must have been a dry cleaners.

5 april | We found this AK in ’08 in France. It was built by SAPA, a coachbuilder that also built (extremely) extended HYs. Originally used by a sister order to transport the laundry. The canvas top can be moved. We restored it for the most beautiful museum in the Netherlands, Edwin Groen’s 2cv collection. Pictures by Martijn van Well.