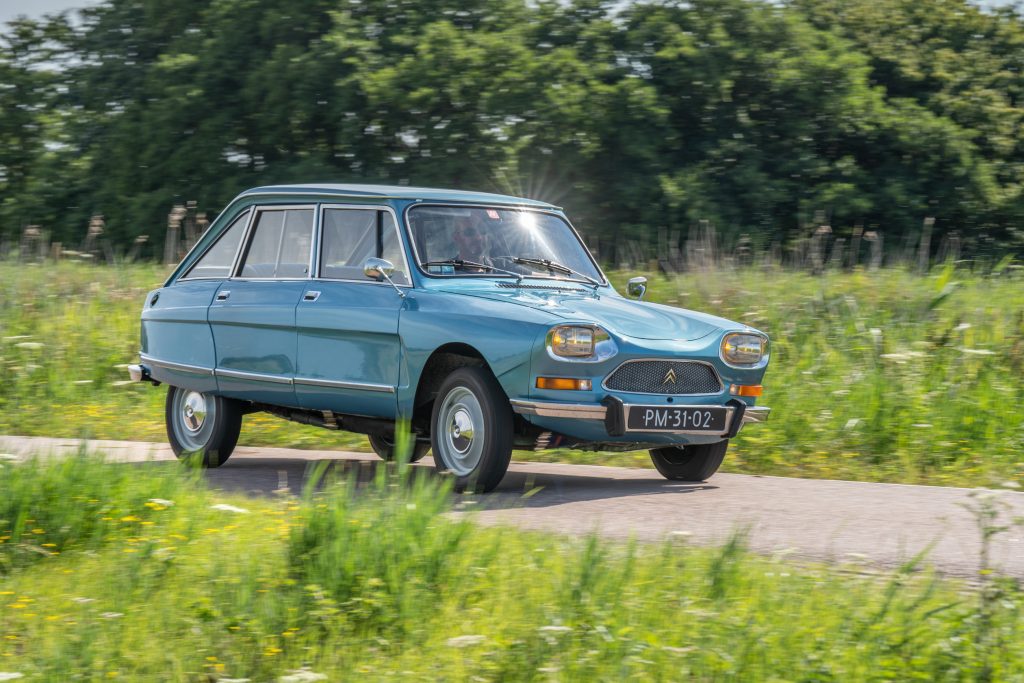 Opération Ami 8 Électrique.  More than 20 electric 2CV’s, Dyane’s, vans and even one electric Mehari already rolled out of our garage. All softly buzzing, comfortable, open roofed fun-mobiles or utilitarian cars for out-of-the-ordinary entrepreneurs. But could we also create more luxury within the electric A-types?

We started out looking at the history of Citroën. At the Paris Motor Show of ’68, the directors of Citroën and carrossier Heuliez met. Heuliez had just unveiled a beautiful Simca coupé and during the conversation the idea came up to make a coupé based on Citroën’s new model, the Ami 8.

Not just a car for normal series production, but a limited series of 500, meant for the new project, called Opération M35. A prestige project with Comotor, Citroën’s collaboration with NSU to develop the Wankelmotor.

The M35 was a prototype, developed to gain practical experience with this revolutionary engine, allowing loyal Citroën customers to drive many kilometers, at least 30,000 per year. These kilometer eaters among the clientele were mostly DS or ID drivers, and had to be seduced by an attractive design, wrapped around revolutionary new technology.

This story appealed to us. Further developing our electrical conversion technology, combined with an attractive exterior design. With a touch of contemporary luxury.

As you may know, we have brought a large collection of M35s back among the people and back on the road. One of the cars of this collection was missing its engine. You can’t just find M35 rotary engines in the scrap yard, so we chose a different, electric approach. We took a large battery pack and the motor that we use for our regular 2cv conversions, and produced a spectacular car. It’s still in development, so you’ll probably hear and see more of it later.

Looking for more reproducible luxury, we came to the Ami 8. A little more ‘car’ than a 2CV, great suspension, daring lines, seventies stylish. We chose a very well preserved example in the more luxurious Club trim, which came from a large collection from the South of France. We put it on an adapted version of our EV chassis, with a 27kWh battery pack, and mounted a 3 phase charger to quickly add more kilometers.

Bleu Grignan became the colour of the exterior, an appealing metallic colour, originally for the Ami Super, to make the lines of the car speak in the same way as the Gris Nacré does on the M35. The interior is soft blue and sleek black.

We can be brief about the result; it’s fantastic. It drives wonderfully smooth and balanced. A nice mix of luxury and simplicity, weighing under 1000kg, efficient, quiet, and appealing.

Back in the day, there were 5000 applicants for the prototype M35, despite the hefty price. Only 500 were accepted and even less got an actual car.

How long will the lines be for the Ami-E, will history repeat itself?