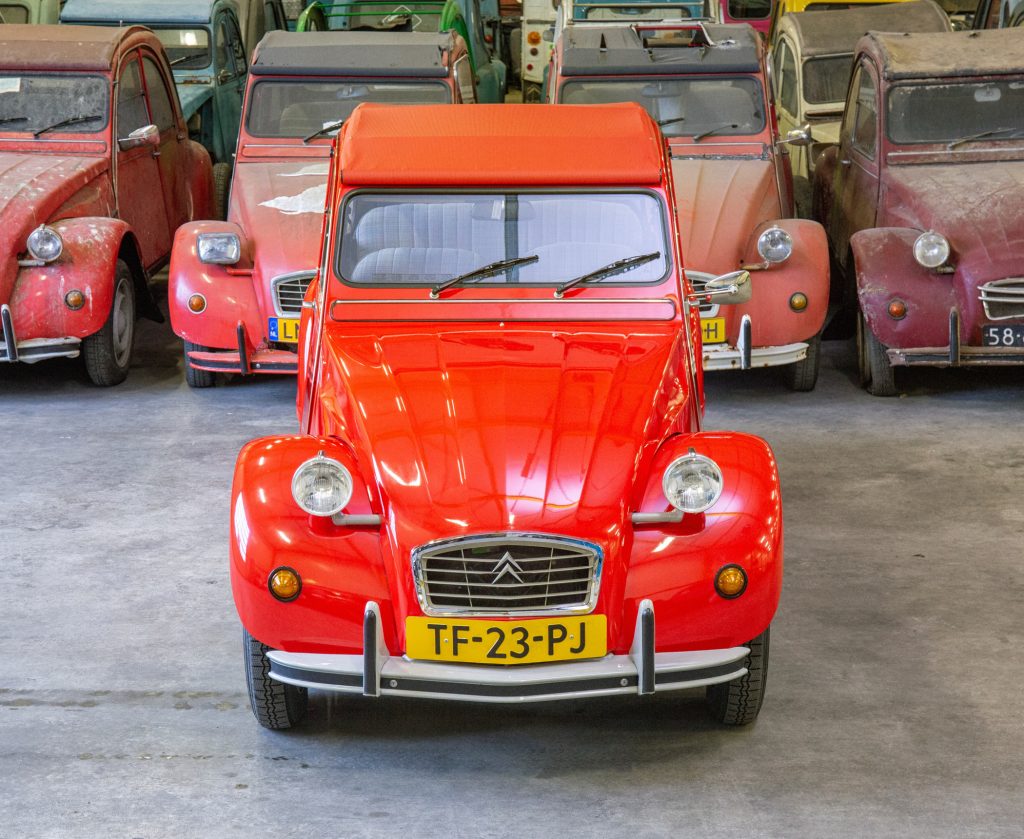 We have met people before that had rushed to order a 2cv at the end of the French or Portuguese production. Some where used, others immediately stored, in the attic, a barn or in a showroom. That’s what happened to this car, in this case at Citroën dealer Terlouw in Dalem.

It was ordered on July 24th ’87 at Citroën Nederland,  July 3rdit had already been built in Levallois, near Parijs. Around that time the decision was made to end the 2cv production in France in ’88 and to demolish the 2cv factory. Citroën Amsterdam stopped importing 2cv’s and delivered the last ones in September. Later on some new 2cv’s came to Holland through grey import, mainly from Belgium.

Why Mr Terlouw decided to keep the car, we haven’t been able to find out. Maybe it was a demo car or it was used privately for a short period. In July ’88 it was registered, it stayed in the showroom until ’16, with only 195km on the clock.

It was accompanied by a couple of other Citroëns, a small collection, the sales activities were stopped in the early nineties.

A Dutch collector got the chance to grab it. With a delay of 28 years he wanted to have the straight-from-the-showroom-feeling and brought the car to us. We brought it back to life.

Fluids were changed, a new pair of (round) tyres fitted. It’s amazing how quick a 2cv can be reanimated after such a long period of sleep. It took Sleeping Beauty somewhat longer to rub the sleep out of her eyes.

After this, about 450km were added to the meter during a few small trips on sunny days. Now the owner found some new fun in collecting other classics and decided this almost new 2cv could find a new home. Static, maybe even in a museum, or starting a driving career from (almost) scratch. It’s up to the new owner.