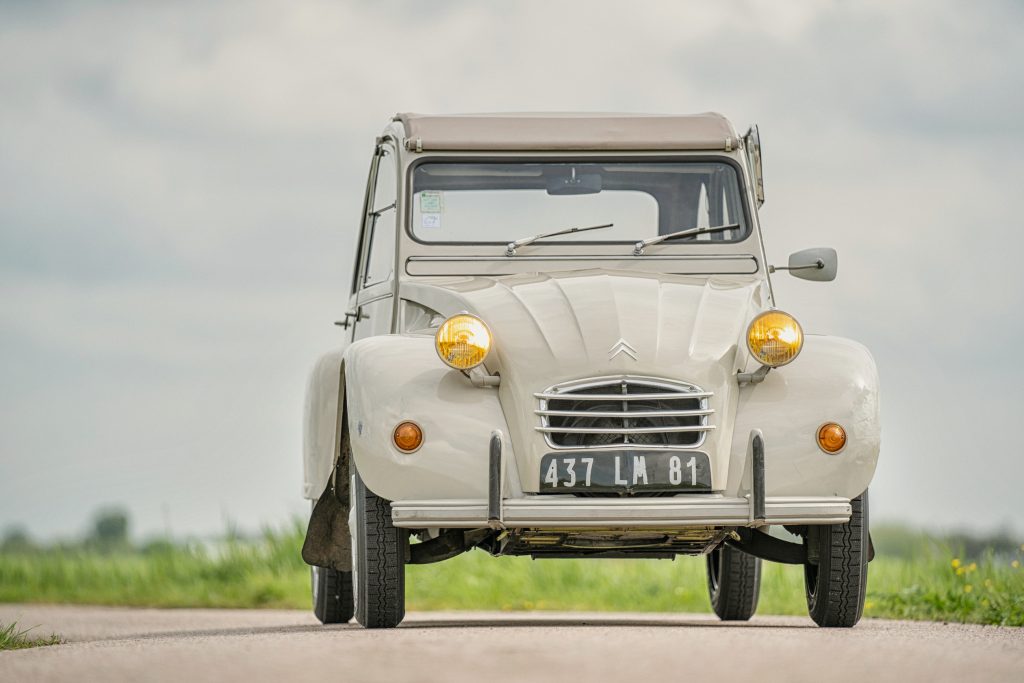 On May 18th 1971, ms. Maraval ordered her new 2CV. She could already opt for a 2cv6, yet decided to go for the slower 2cv4. Perhaps she already knew she was only going to be using it locally. Possibly the dealer even tried to convince her to opt for the comfort of speed, something he wasn’t a stranger to himself: Ms. Maraval bought the car from Pezous in Albi. The owner, Maurice Emile Pezous, used his initials to name some of his own sporty creations. From a sporty coupé, to monoposto racecars he built with stock mechanical parts.

The MEP X1, X2 and X27 were meant to be a budget racecar for beginning drivers or schools. We once owned two X2s, one was used in a school in Nivelles and the other on the Nogaro circuit. This model used an Ami 6 gearbox and a Panhard 24 engine; the X27 later used GS-mechanics. Due to its cigar shape and light weight, these cars would hit up to 200 km/h. Great toys to have, hence we quickly got rid of them.

Ms. Maraval received the keys on August 18th, after the 2CV had been produced on July 20th. At the time cars were given a delivery service at the dealership and another one at a 1000km mileage. The oil was renewed and a range of other things were checked. The maintenance record indicates that this car received its first check in May of ‘72, at a mileage of merely 80 km. Strange, and perhaps a sign that it would not be used much in the future.

The car was delivered to Avenue Gambetta and storedat Avenue Colonel Teyssier, a one-kilometer drive and one turn away. Both locations are still visible on Streetview, although the garage has now turned into a horrible store. Ms. Maraval did not drive the car frequently, covering about 1000 km per year, and didn’t really leave the neighborhood either. Even the maintenance was done by a neighbor across the street, a garagiste toutes marques. After Ms. Maraval’s passing at age 93, the 2CV now belonged to her son. He lived in a French overseas territory, but kept the car in his mother’s shed. The shed’s doors opened wide enough, yet some parts of the car did have some involuntary contact with them. Some of the damage was repaired, other damage was not – we left it like this, as well, so the next owner can decide what to do. We also kept the original wheels with the first tires, as well as a dented bumper, for the same reason.

The interior has always been well cared for and is therefore in perfect condition. We allowed the contemporain vinyl carpet to stay. The floor and chassis are truly in mint condition; they must have never seen any rain. It even still has its first roof. In addition, the cars was kept driveable, even though its mileage went from 23.399km in ‘93 to just shy of 25.000km present day. It’s a pleasurable drive, with a smooth suspension. Recently the son decided to tell the 2CV goodbye, which led us to find it through our network.

You don’t see many 2CVs from this era anymore. Especially not this well-documented and in such good state. We are always happy with these kinds of time machines, and we think you will be, too.

It is original only once, but if you find the original sheet metal a bit too worn, we’ll be happy to think along with you in adapting it to your taste, even financially.